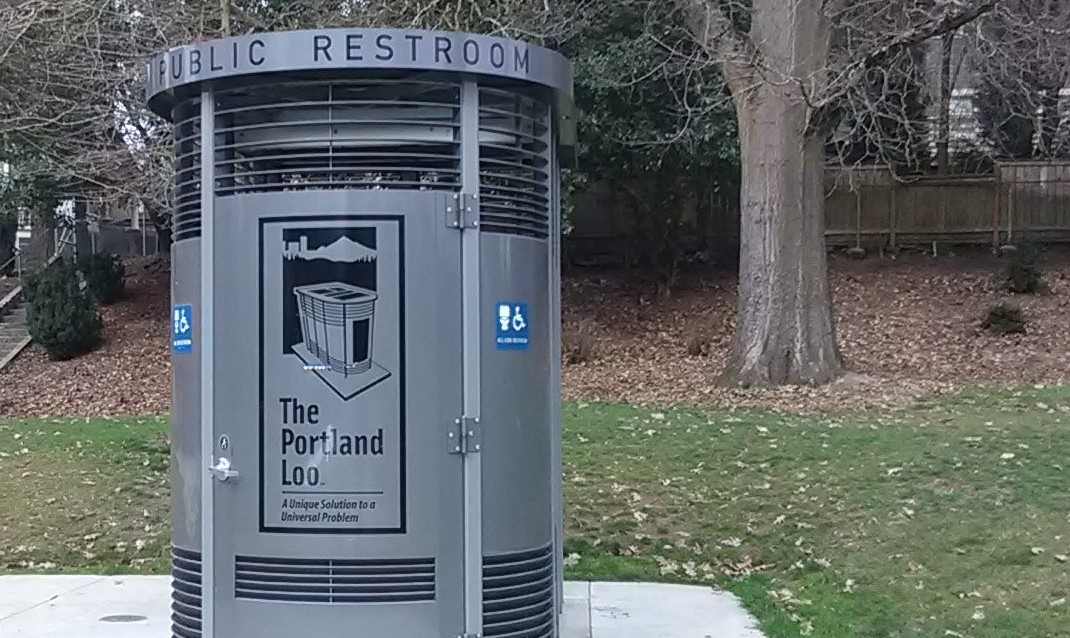 A lot of people go downtown, but if you have to go when you go downtown, there aren’t always places to go. That will change when Athens-Clarke County builds a “Portland Loo” outside the College Avenue parking deck.

Named after the city where it originated, the Portland Loo is a vandalism-resistant, prefabricated, stainless steel public restroom that can be easily cleaned twice a day. A public restroom downtown has been discussed since 2018, and the commission voted to move forward at its Oct. 5 meeting—but not without objections.

Several citizens who spoke at the meeting read emails, purportedly from a Portland resident, that described heroin addicts using public restrooms to shoot up drugs. Commissioner Jesse Houle, who has lived in Portland, disputed that characterization.

“They’re generally fairly well used and maintained and thought of positively by a lot of people,” Houle said.

Despite the loo being discussed at two previous work sessions, Commissioners Allison Wright, Mike Hamby, Ovita Thornton and Patrick Davenport voted to send the idea back to the drawing board.

“I’m not over the sticker shock,” Wright said of the $314,000 initial cost.  “There are a wide variety of concerns we can’t answer yet.” Wright said she preferred “luxury portables” over the “Gucci expensive model.”

ACC received hundreds of public comments on the loo, with many citing their use by homeless individuals as a reason to oppose it. However, Houle described the comments as “overwhelmingly positive.” Out of more than 700 people who responded to a survey, majorities reported seeing human feces downtown and said they’d be more likely to visit downtown if there were a public restroom.

“It seems to me the political ads will write themselves with this issue,” Hamby said. City Hall and the Classic Center already have public restrooms, and so will the Costa Building near City Hall when it’s renovated, he said.

Commissioner Carol Myers agreed with the former campaign operative’s political assessment, but said that many of the 28 cities that have built public restrooms, like Vancouver and Cambridge, MA, “had really good luck with them” because they were situated in areas like downtown Athens that have a wide variety of people, not just the homeless.

“I think we have a good chance for this to be very, very successful downtown,” Myers said. “Yes, it’s a lot of money. A sidewalk costs $200 a foot.”

Ultimately, the commission approved the Portland Loo by a 7-3 vote, with Davenport supporting it after twice backing delays. The plan also includes a drinking fountain for pets, landscaping, public art and space for portable toilets during special events.

The commission voted to table what would ordinarily be a routine request from the University of Georgia to install fiber-optic lines on ACC right-of-way for security cameras on Lumpkin Street, Baldwin Street and College Station Road—a sign of the commission’s deteriorating relationship with UGA.

“I plan to vote no on any item that asks for an agreement with UGA until we get some greater cooperation from them and some better response when it comes to their impact on our community, when it comes to living wages, when it comes to affordable housing, a number of issues, redress of Linnentown,” Commissioner Melissa Link said. “I feel like UGA has betrayed the trust of this town on many, many levels, and until we have some concerted evidence of concern for our community, I’ll be voting no.”

Commissioner Mariah Parker added that the Athens Justice and Memory Project has reached out to UGA about putting historical markers on its property to commemorate the Linnentown neighborhood, which was razed in the 1960s to make way for dorms on Baxter Street, but has been ignored. In addition, she said that adding cameras to catch criminals after the fact isn’t a proactive approach to preventing crime.

“It seems like whenever the University of Georgia approaches us for something, when they ask us to jump, we say how high,” Houle said.

Thornton said she agreed that UGA should be more collaborative, but it’s a two-way street, and Linnentown is a separate issue. “To use Linnentown as a noose, I think is wrong,” she said.

When it appeared there might not be enough votes for the item to pass, Commissioner Russell Edwards moved to table it for a month, which passed 6-4.

Another usually routine issue, the purchase of new police cars, also proved contentious. Houle and Link argued that the Ford Explorer-based interceptors ACCPD wanted to buy are intimidating and dangerous. That’s accurate—studies show that heavier vehicles with higher grills are more likely to kill or seriously injure pedestrians. However, the commission has also sought to electrify the county fleet, and the Ford SUVs are the only hybrid police vehicles available, so the purchase of the hybrid Fords to replace gas-powered vehicles was approved 8-2.

In a meeting where the commission finalized a lot of business that has been hanging around for some time, the commission also approved a human relations commission that will provide an avenue for residents to file complaints about violations of the local civil rights ordinance. It was opposed by local Republicans, who appeared to conflate it with a proposed civilian police oversight board. It also unanimously approved a $400,000 study on racial disparities in local government. Another alternative response team—which pairs a police officer with a mental health professional to deal with calls involving suspected mental health issues—was also approved, along with a contract with nonprofit Athens Behavioral Health Systems to form a civilian response team based on the CAHOOTS program in Eugene, OR, at a total cost of $276,000. All of those items were already included in the previously approved 2022 budget.

The commission also voted on a set of priorities for the May TSPLOST referendum on whether to continue a 1% sales tax for transportation projects. The list includes bridges, road repaving, culvert replacement, transit, electric vehicles for the ACC fleet, a roundabout at Broad Street and Hancock Avenue, completing the Firefly Trail and permanent improvements for the pedestrian plaza at College Square. A citizen advisory committee is currently vetting about 90 proposals worth a total of $700 million, but that list will have to be narrowed down considerably. The tax is expected to raise about $145 million over five years.

In addition, the commission voted to spend another $500,000 on incentives to receive COVID-19 shots, on top of $350,000 already allocated. While previously the partnership to give $100 gift cards to people who get a shot was limited to the Clarke County Health Department, now it will be extended to other health-care providers that serve low-income and otherwise marginalized communities. Those providers will be selected at a later date.

Like what you just read? Support Flagpole by making a donation today. Every dollar you give helps fund our ongoing mission to provide Athens with quality, independent journalism.